Blue Gate Antwerp is a historically polluted blackfield site which is being transformed into a sustainable business park. Located in Antwerp’s old petroleum harbour (Petroleum-Zuid), the redevelopment is being undertaken in three phases, which will run until the end of 2036.

It is one of the most complex remediation projects DEME has ever been involved in, both in terms of scale but also because of the number of parties involved in the public private partnership.

Blue Gate Antwerp site is south-west of Antwerp city centre, at a strategic location just outside of the ring-road and covers a mostly abandoned petrochemical cluster. Construction works for this petrochemical cluster started as early as 1902 and a year later the first tanker arrived.

Throughout the years this petroleum cluster has been systematically expanded. Soon it became clear that the site was heavily contaminated, largely as a result of various pipelines, and moreover, a fire in 1904, which is reported to have caused about 24,000 m³ of kerosene to seep into the ground. Mineral oil contamination in the ground and groundwater was found across almost the entire site.

The total volume of ground contaminated with mineral oil is estimated at 430,000 m³. Pure product has also been found at numerous locations. The scum layer surface covers approximately 50,000 m². Finally, very high concentrations of PAH and heavy metals were found in the raised soil (about 1,000,000 m³).

In 2001, the first ideas for the redevelopment of the site arose and with the approval of a brownfield covenant ‘Investment zone Petroleum Zuid’ in 2009, the first steps were taken to draw up the strategic master plan. In 2012, the project’s Environmental Impact Assessment was approved, and the City called for the launch of a Public-Private Partnership (PPP) for the remediation and development of the site.

In February 2016, the PPP was awarded to the Blue O'pen Consortium, which is headed by DEME and sustainability specialist Bopro. Together with the various public partners (Participatie Maatschappij Vlaanderen, AG Vespa and W&Z), Blue O'pen constitutes the PPP BGAD, which has appointed THV DEC-DI as a temporary trading company to perform the ‘Remediation, Raising and Infrastructure’ works. 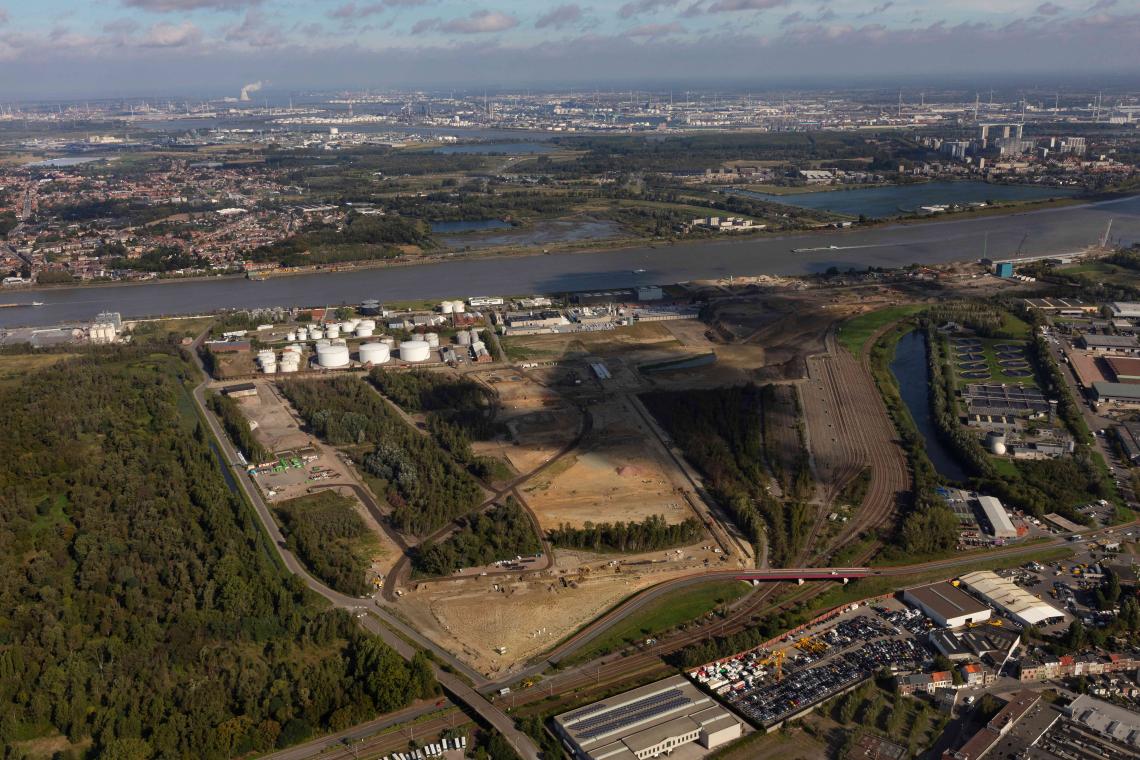 This mammoth and complex project highlights how we take a proactive approach to tackling these historically polluted sites.As the main contractor, DEME is responsible for all the remediation landscaping and infrastructure works. 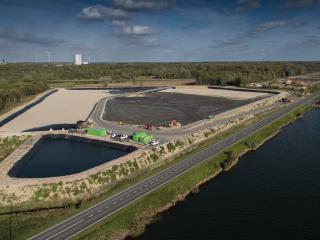 In close consultation with the parties and authorities concerned, a tailor-made, Soil Remediation Programme was drawn up, which aimed to remove a substantial amount of the waste load and to eliminate the risks associated with the various contaminations according to the BATNEEC principle. Furthermore, we gave special attention to the project’s sustainability, to further promote our customer’s vision of eco-efficiency. This eco-effective approach assumes not only a minimalisation of the negative footprint and contamination, but also a sizeable positive footprint. In this way, we believe economic growth and ecological added value can go hand in hand. By this massive redevelopment, Blue Gate Antwerp wants to repurpose one of the largest blackspots in Belgium, with cleaner air, more renewable energy, more recovery and recycling of materials but also more social added value and employment as a result.

Drawing up the Soil Remediation Programme

Within the SRP we divided the industrial site and recreational area. The recreational area covers a ‘green corridor’ of 14.5 ha, which serves as an ecological connection to the nature reserve ‘Hobokense Polder’. The construction of a cycle path from new Antwerp district ‘Nieuw Zuid’ through this green corridor further ensures the integration of the site into city life.

We drew up risk-based, remediation goals for both redevelopment scenarios in the soil remediation project. Subsequently, final remediation values were determined based on an intensive BATNEEC assessment. In addition, a site-specific, test protocol was drawn up in association with VITO and the laboratory Servaco, to assess the possibility that a scum layer would form from the excavated materials. We also set up a protocol for site-specific batch tests (L/S ratios, leaching intensity and duration, ...). The selected site-specific, rapid test was subsequently integrated into a decision criterion for the identification of the soils which need to be cleaned after excavation.

The selected remediation variant consists of excavating the various contamination cores to the predefined remediation values, after which the excavated batches are evaluated by the site- specific, rapid test. This dry excavation was supported by intensive pressure drainage (output 60 m³/h). After we had treated the contaminated groundwater, it was discharged into the Leigracht, to limit the load on the city’s water treatment facilities. While the known cores were excavated, additional trench research was carried out to detect as yet unknown contaminations. Here we projected a raster of about 1,000 sections onto the terrain. After excavation of the contamination cores and the removal of the remaining infrastructure (pipelines, foundations, ...), our next step was to raise the terrain, in line with the hydrogeological model for future water management.

To reflect the durable character of the redevelopment, the soil remediation project contains plans for the on-site treatment of the excavated soil to be cleaned in a biological cleaning centre. After we had excavated the contamination cores, the next step was to level the terrain, and then to raise it in preparation for the predefined redevelopment.

To limit the removal of soils rich in PAH and heavy metals as much as possible, complex on-site earthmoving rules were drawn up in the SRP. The terrain was divided into zones with similar contamination levels and recycling rules were drawn up, with a closed soil balance as a result. In this way durable recycling of the various soil streams within the project area is assured, and a full integration of remediation, earthmoving and redevelopment is achieved.

As the soil remediation works are only the first step in the redevelopment, a fully detailed project draft was required as well. Awarding the infrastructure works is also part of the responsibilities of the THV DEC-DI. Therefore we drew up detailed plans for infrastructure works such as a sewer system, roads, cycle paths, public lighting and a heat network. The integration of the existing heritage was also determined in close consultation with the authorities concerned. We made sure the public were kept fully informed by several neighbourhood information meetings.

We started active operations in the second quarter of 2017 with clearing works across the entire site. Subsequently, the soil from the top layer (0.5 m) was fully excavated and sifted and all remaining structures (tracks, paving) were dug up and removed.

Then we carried out the earthmoving activities, whereby we replaced 100,000 m³ in the initial phase. Lightly polluted soils could stay on the site once they had been mapped and reported. The core remediations included the excavation and removal of the scum layer areas. The core remediations included 80,000 m³ of soil which needed to be cleaned. To achieve this, pressure drainage was required. The water that was released was treated by the present treatment installation, which operates at 60 m³/h. This installation consisted of a buffer basin, sand filtration and is completed with an active carbon filtration. We excavated some of the old pipeline routes as well.

We also had to perform remediation works above ground. For example, some of the heritage that should stay in situ concerned pipelines which still contained pure product and this all had to be removed.

In the first phase we eventually remediated 100,000 tonnes of polluted soils and moved some 200,000 tonnes. Phase 1 of the remediation and infrastructure works was completed in 2019.