The OK Tedi mine is situated in the Western Province of Papua New Guinea, 1,600 m above sea level in the Star Mountains, a remote region 1,000 km northwest of Port Moresby. This area suffers from a massive annual rainfall (over 8 m), geological instability, a steep terrain and seismic activity. These conditions result in frequent landslides, preventing the safe construction of dams to retain mine tailings and deliver huge natural sediment levels to the river system.

The PNG government had therefore approved the discharge of mine waste into the river system alongside an extensive environmental monitoring programme. The mine waste and other sediments had caused the riverbed level to rise by 4 m at Tabubil and by 6 m at Bige. This had led to navigational difficulties on the Fly River, to which the Ok Tedi is a tributary. 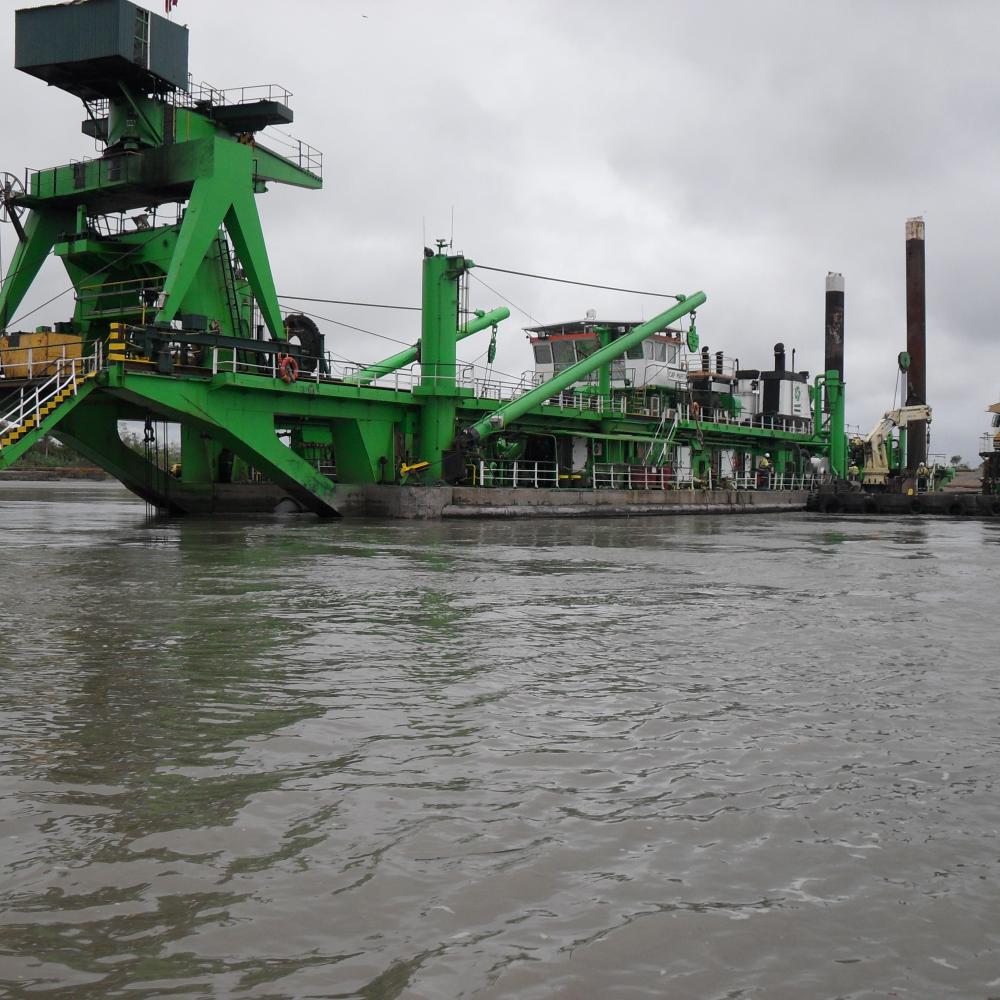 DEME was originally awarded the contract by the Ok Tedi Mining (OTML), one of the world’s largest gold and copper mine operators, way back in 1997. Initially under the trial period this involved dredging ± 20 million tonnes of material per year from the lower OK Tedi River and securing the dredged material in an inland reclamation/storage area. Subsequently, we have been dredging and pumping about 12 million m³ of minetailings ashore each year.

Together with OTML we developed a solution to excavate a “sand trap” or slot in the riverbed near Bige. Continuous dredging of the slot would remove the sand from the river. After dredging a shelter on the East Bank and an access channel to the selected trap site, the team began to construct the sand trap in the riverbed.

Excavation of the slot took 15 months, and involved the removal of more than 1.5 million m³ of gravel, cobbles and boulders. Some 7.3 million m³ of sand carried down by the river has been pumped from the lower Ok Tedi River and deposited in a reclamation area carved out in the jungle. During this period the river was studied to calculate the optimum balance between the infill rates and dredge capacity.

Working closely with the customer, we developed a strategy to incrementally enlarge the slot and following surveys of the infill rates, an optimum slot was developed that balanced economics and dredging efficiency. The final slot dimensions are 800 m long by 220 m wide with variable depths from 6 m to 12 m.

The cutter suction dredger 'Cap Martin' has now been extracting sand from the slot at a rate of 12 million m³ per year.

Crew - Cadet traineeship on board Summer 2023

If you follow a maritime education and you are free during 4 weeks of the Summer period in 2023, it would be nice to get to know you and your work spirit during an internship on board one of our vessels! Please apply with your CV and motivation letter. We inform you about the result of the selection in April 2023.

If you follow a maritime education at a maritime institute and you are free during the Easter period for 4 weeks, it would be nice to get to know you during an internship! Please apply with your CV and motivation letter. We let you know the result of the selection in January 2023.