Dredging and reclamation works for the construction of a new island of 400 ha, including soft soil improvement by installing vertical synthetic wick drains, beach formation, quay walls and a coastal protection strip.

This artificial island, which resembles a string of pearls, was designed as a self-maintaining, luxurious residential area which can accommodate around 30,000 residents. It would include a full range of residential and recreational facilities such as spacious villas, apartments, hotels, beaches, shopping centres, restaurants, inland canals and waterways, private and public mooring places for yachts, and much more.

The overall concept was that “The Pearl Qatar” should bring the atmosphere of the Riviera to the warm waters of the Arabian Gulf. 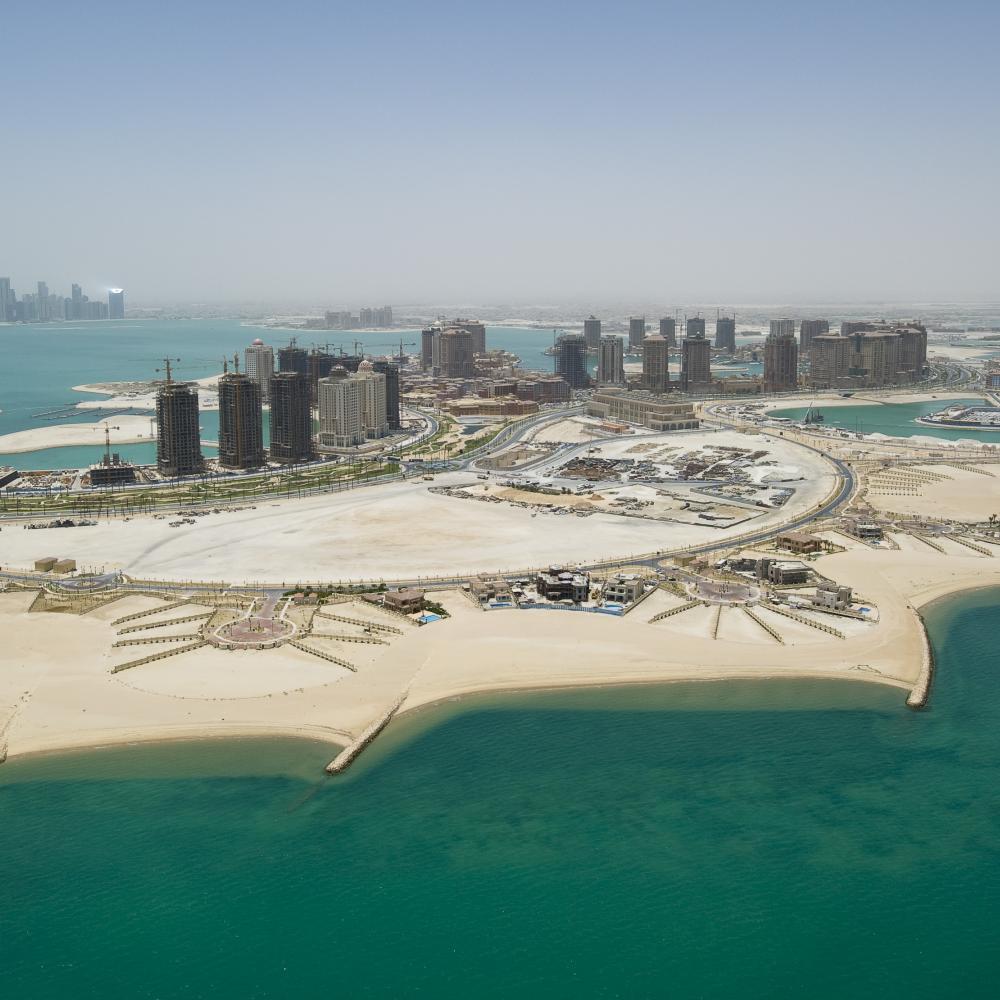 "Qatar Dredging Company” (QDC) (now known as MEDCO), a Joint Venture Company in which DEME has a share of 44.1 %, was awarded the contract for the execution of this extremely complex project, which embraces several different disciplines. Within this Joint Venture Company having United Development Company (UDC) (45.9 %) and Qatar Holding (a Subsidiary of Qatar Investment Authority) (10 %) as Qatari shareholders, DEME mainly deployed the necessary resources for the dredging works, earthworks and project management. As well as dredging and earthworks, our tasks encompassed reclamation, soft soil improvement, the installation of vertical wick drains, dry rock excavation, on-site rock cutting, coastal protection and concrete works such as building quay walls. The project kicked off in July 2004.

Excavation and backfilling by means of dry earthmoving equipment and hydraulic reclamation
The subsoil within the footprint of the island to be constructed is a natural shallow area consisting of different layers, ranging from fine soft materials to hard limestone rock. The reclamation works for the island had to be carried out to a final level varying between +2.5 m and +2.7 m Qatar National Height Datum (QNHD), while the existing seabed levels before reclamation were between -2.5 m and -4.0 m QNHD.

Our volume balance analysis showed that two thirds of the total reclamation volume needed to construct the island had to be excavated on-site within the footprint of the island to be constructed and the remaining volume had to be extracted elsewhere by means of a cutter suction dredger. Once we identified a suitable marine sand source where this additional volume could be dredged, we came to the conclusion that the large pumping distances had to be bridged by using an intermediate booster station.

We performed the rest of the excavation works to be carried out outside the perimeter of the proposed island by using the cutter suction dredgers 'Al Mahaar' and 'Kalis II', two dredgers that have been modified for dredging in shallow waters. The 'Al Mahaar' was modified especially for this project so it could be deployed for rock dredging in very shallow waters.

Accelerated settlement techniques
Additionally, some areas within the footprint of the island consisted of an unstable, soft silty subsoil, which resulted in a large volume of reclamation needed to compensate the consolidation of these soft layers. In order to respect the strict planning schedule, we had to use accelerated settlement techniques in these areas in order to reduce the consolidation time of these soft layers. These specialised techniques consisted of vertical synthetic wick drains, combined with temporary surcharge loads of 3 m (above the final reclamation level). This surcharge loads were placed on top of the reclamation by using dry earth moving machines, such as dumpers and bulldozers. In total, an area of 640,000 m² was consolidated using this accelerated settlement technique. After the required settlement was achieved, we removed the surcharge loads, also by dry earth moving techniques involving excavators, wheelloaders, bulldozers and dumpers.

Quaywall construction
During the last phase of the project, approximately 47,500 m² of quay walls were also constructed. Concrete blocks, pre-cast on site, were used for the construction of these quay walls.

Protective measures with regard to flora and fauna
In order to mitigate as much as possible the disturbance created by the construction works to the local flora and fauna, we performed a wide range of monitoring measurements and controls. Before the start of the project we measured a number of parameters to define the project baseline environmental conditions and these same parameters were regularly (daily, monthly) monitored during the course of the project.

In addition, silt screens were used during the dredging activities in order to limit the impact of these activities to the surrounding areas.

Shore protection
Finally, a long coastal strip of approximately 39 km at the perimeter of the island had to be protected from erosion. This required an impressive volume of about 2 million m³ of rocks and stones to be placed in breakwaters, groynes and other rock revetments. According to the ‘make work with work’ principle, a rotary 'Grizzly' and several sieving installations were deployed on-site in order to recover suitable rocks and stones from the huge volume of excavated materials and re-use them for the construction of the shore protection.